According to GuideLive.com, the two aren’t set on where to live, but one thing is for sure. She’s going to take him to the Red River Showdown and show him why OU still sucks:

Bonus: Did you know Rachel dated Kevin Durant when they were students at the 40 Acres?

Not all hacks are bad, and not all heroes wear capes.

Great job to whoever did this. OU still sucks!

Even though he’s a Trojan (and forever our enemy), Actor Will Ferrell answered a question last week on a New York Times Q&A here in Austin during SXSW about whether fraternities should exist at all, given all of the attention from OU’s SAE incident a few weeks ago:

Q. Will, we are fraternity brothers of Delta Tau Delta, albeit different chapters and years. The recent awful situation with SAE has brought out the “frat haters” in droves. Could you comment on your own fraternity experience and why (or why not) fraternity membership is still a worthy consideration for a college student? —Stephen Browning, Seattle

A.The incident in Oklahoma, that is a real argument for getting rid of the system altogether, in my opinion, even having been through a fraternity. Because when you break it down, it really is about creating cliques and clubs and being exclusionary. Fraternities were started as academic societies that were supposed to have a philanthropic arm to them. And when it’s governed by those kind of rules, then they’re still beneficial. But you gotta be careful. I was lucky in that the one I was in, we were really kind of the anti-fraternity fraternity. We were considered good enough to get the exchanges with the good sororities. We couldn’t get anyone to vote on anything, but if you needed 40 guys to show up and build a 20-foot-tall papier-mâché version of the Matterhorn, we were there and ready. But we didn’t take it too seriously. It was just about having fun. But I think it’s an interesting dilemma for universities these days

Just about a month ago, it was at a Texas FIJI party where guests wore “ponchos, sombreros, and construction gear” to a Mexican-themed event.

Well, it looks like the SAE chapter at OU took its racism above and beyond in one of the most despicable, vile videos one can watch. See below.

The one common thread among the two events? They apparently don’t know that the Internet exists.

Total Frat Move has reported that the chapter and all of its members have been suspended.

It’s no surprise that we play a game against OU in the great state of Texas rather than the stinkhole armpit of America called Norman. Here are the Top 15 Reasons Why Oklahoma Sucks (make sure you read until the end for a special surprise).

15.) Because they’re stupid enough to report something like this

Oklahoma self-reported NCAA violations, including 3 players eating excess pasta at a banquet. Each gave $3.83 to charity to be reinstated.

14.) There’s a reason the Red River Rivalry is held in Dallas. A Longhorn once went to Norman and this happened…

13.) Because a stadium full of Sooners wouldn’t be a pretty sight…

12.) Because most of their team is from Texas

11.) Because they’re dumber than a box of rocks

It comes around every January to Austin, Texas. If you’re brand new here, you probably don’t know what it is. It usually take 2-3 years before you catch it…and it ain’t fun.

Below is a pic that looks like smoke, but it’s actually Cedar pollen flyin’ through the air in the Green Belt. For one, it’ll turn you into a monster.

Your eyes will tear up so bad in the middle of the day…people will think you were this kid from OU. 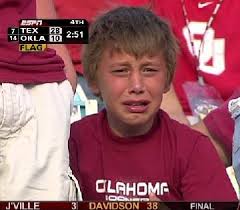 It’s so bad, people will think you were high…

Or, think you’ve turned into some sort of zombie…

Or, that you’ve just broken up with your boyfriend/girlfriend…

And yes, it’ll make you feel as if someone just punched you in the face…

And, just kept on punching you all. day. long.

But, don’t worry. Because it’ll be over soon and you’ll remember one thing.

Well, I’m glad you asked because we found out that answer for you. Now, before you say anything, let us say this…

We all know that anyone born and bred in the great state of Texas is bound for glory. But, you give that up once you forsake the Lone State State. Here’s the breakout for the amount of traitors to leave Texas and where they went this past year…

This should be against state law.

From the Trailer Park Bowl, a mom defends her son’s honor by diving like a “wrecking ball” and kickin’ the shit out of some BroU.